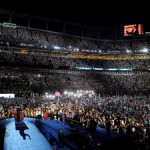 Continuing a tradition of Harman Professional sound technologies being employed at the conventions of both major U.S. political parties, the company today announced that its JBL Professional VERTEC® line array loudspeakers were deployed by leading rental sound system provider, ATK Audiotek, at the Democratic National Convention at Denver’s Pepsi Center. A JBL VERTEC system was also used for presidential candidate Barack Obama’s acceptance speech at the city’s Invesco Field football stadium, with Crown power amplifiers also in use at both facilities. The combination of JBL speakers and Crown amplifiers has also served as the sound system of choice for many of the party’s recent election rallies and assemblies around the nation.

The Pepsi Center in downtown Denver opened its doors to Democrat convention-goers on August 25 and hosted key speeches by Senator Ted Kennedy, Michelle Obama, Senator Hillary Clinton, former President Bill Clinton and other party stalwarts including Vice Presidential candidate, Senator Joe Biden. The convention concluded on August 28 with an acceptance speech by Senator Obama at Denver’s Invesco Field and featured live performances by Steve Wonder, Jennifer Hudson, Will.i.am accompanied by John Legend, and the Agape Choir, Sheryl Crow and Michael McDonald. The stadium swelled to an 85,000-person capacity with much of the infield used for temporary seating.

“From the Grammys to the Emmys to the Academy Awards, ATK Audiotek’s business is dedicated to providing excellent, highly reliable sound performance coupled with world-class customer service for the most prestigious events in the United States entertainment, sporting and political calendar,” Stahl said today. “For these once-in-a-lifetime special events we cannot afford to miss a spoken word, a musical note or any subtle inflection, which is why we work with the sound components and the people from Harman Professional. JBL VERTEC loudspeakers and Crown amplifiers provide my team with the sound system performance to get our job done successfully along with the ease of mind to sleep comfortably before these large events!”

Echoing this sentiment, Michael MacDonald, Executive Vice President of Marketing & Sales at Harman Professional, noted, “Working with top professionals like Mike Stahl and Scott Harmala at ATK Audiotek, along leading event sound designers such as Pat Baltzell, we are honored and pleased to have our sound system technologies deployed in the most demanding and prestigious applications like the Democratic National Convention. But just as we are encouraged and gratified by the consistent use of our products in these mission-critical events, we understand the need to earn our customers’ business with every product we build and with every project we support!”

ATK Audiotek Inc. can be reached at http://www.atkcorp.com/