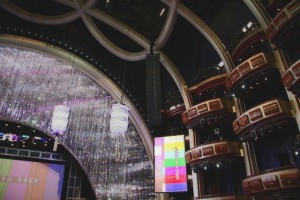 One of the biggest nights in entertainment, the 81st Annual Academy Awards were broadcast live on ABC and were hosted by Hugh Jackman. The evening’s highlights included “Slumdog Millionaire” winning Best Motion Picture of the Year, Sean Penn taking home Best Leading Actor for his performance in “Milk,” and Kate Winslet earning Best Leading Actress for her role in “The Reader.”

As with numerous high-profile events in recent months, including the Presidential Inauguration, the GRAMMY Awards and the EMMY Awards, Pat Baltzell designed an audio system built around JBL VERTEC line arrays. “I have had tremendous success working with VERTEC for some of the most-watched events of the year,” Baltzell said. “The Academy Awards presented another opportunity to utilize the easy rigging and reliable performance of VERTEC line arrays.”

The main PA system included two arrays in a left-right configuration, each containing 14 JBL VERTEC VT4889 full-size line array elements. Additionally, 140 JBL Control 25T surface-mount loudspeakers were set up underneath the audience seats in critical-listening VIP areas for the nominees and special guests. These were powered by Crown I-Tech 4000 amps.

According to Baltzell, the VERTEC line arrays once again performed to expectations. “I was able to tune the system very quickly and focus my attention on mixing for the variety of performances and presenters throughout the evening,” Baltzell said. “The VERTEC line arrays allow me to operate with confidence in the technology, which makes a huge difference.”

“Our continued collaboration with Pat Baltzell for events like the EMMY Awards, the Super Bowl, and now the Academy Awards, has proven to be very successful, and the VERTEC line arrays have played a significant role in that success,” said Scott Harmala, Vice President of Engineering, ATK AudioTek.