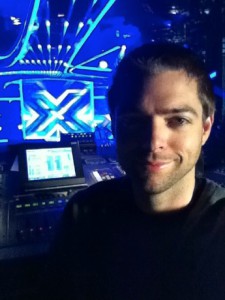 NORTHRIDGE, California – It’s not hard to put a finger on the popularity of The X Factor, which recently completed its first season in the United States. The top-rated singing competition TV show (which aired on FOX) pits contestants against one another to see which pop singer has that certain indefinable, yet undeniable star quality-that all-important “X Factor.” To provide high-impact audio on the set of The X Factor, Valencia, California-based ATK Audiotek installed a HARMAN JBL VERTEC(r) line array system designed by Jeff Peterson.

On The X Factor, competitors in various categories have to sing, dance and perform in front of celebrity judges Simon Cowell, Paula Abdul, L.A. Reid and Nicole Scherzinger-and a national audience of voters. It’s a high-pressure atmosphere, especially since the shows are taped in front of a live audience.

“The contestants aren’t the only ones who have to perform under pressure,” noted Brett Valasek, general manager of ATK Audiotek. “Since the show is taped before a live audience, the performers have to be heard loud and clear, and the system has to be dynamic and powerful to connect the audience with the excitement of the moment and the performers.”

“The producers wanted concert-level energy for the show,” Peterson said. “With the 400-person audience routinely reaching 105-108 dB SPL, the sound system had to cleanly deliver the music and performances over the roar of the crowd.”

As the PA mixer as well as sound designer, Peterson’s job had multiple facets. “I had a responsibility to keep the broadcast dialogue clean, while at the same time ensuring that every audience member and contestant could understand what was being said,” he noted. “When performances happen, production wanted a rock concert feel, with the audience on their feet, clapping, cheering, hooting and hollering. You can see how the dynamics of the show were huge.”

Peterson was in constant collaboration with Eric Schilling, the broadcast music mixer on performances. “My mix in the house-which naturally leaks in to the audience microphones-had to blend cleanly with the broadcast mix,” Peterson added. “If I was using an effect in the house that was different from what was on the air, it was noticeable to viewers.”

The VERTEC VT4889 line arrays were installed in a left-center-right configuration to maintain the striking visual appearance of the set. “The system design was supposed to be eight per side, which abruptly changed on the first day of load-in,” Peterson said. “The show highlighted the scenic and video screens almost as much as the performers and judges. The set looked amazing, and my clusters were too large to maintain the clean look. We quickly redesigned the system to a left-center-right layout, with six VT4889’s as the left and right clusters and four VT4889’s making up a center cluster.”

In addition, the height of the scenery on stage was only about eight feet lower then the rigging grid. “The speaker clusters, with their chain motors, had to fit within that space in order to avoid blocking any video,” Peterson said. “In addition to that, there was a large ‘X’ shaped ceiling piece that was made of hard flat surfaces. The ceiling piece blocked my horizontal coverage towards the center, which necessitated the center cluster.”

To deliver the show’s dialogue, the Control 23 and Control 25 loudspeakers were placed under every third seat in every other row. “We needed to make sure that everyone in the audience could hear the judges now matter how loud things get during the show,” Valasek said. “It’s a challenge to maintain the dialog at a specific level on a show like this. That’s why we chose the under-seat system using the Control 23 and Control 25 speakers-so we didn’t have to put much of the dialog through the main PA.”

ATK Audiotek also built three SRX712M monitor wedges into a trough behind the judges seating to enable them to hear all the music and performer’s comments clearly.

“JBL VERTEC line arrays are what we use in the vast majority of our projects because of their clarity, controlled coverage pattern that is easy to work with, and ability to adapt to a variety of installation applications,” Valasek stated. “We have a very high comfort level with them and they always deliver outstanding performance.”

“A properly designed VERTEC VT4889 system never ceases to deliver,” Peterson concluded. “I have the highest confidence that I’ll be able to get both the high SPL levels needed without distortion, and clean low volume dialogue out of the same system.”

For more information about ATK Audiotek please visit www.atkcorp.com.
somabuyonline.com
tramadol-faq.com
www.one-soma.com
ambien-online-rx.com
online-ambien-zolpidem.com
discountvaliumonline.com
valium-pills-online.com
HARMAN (www.harman.com) designs, manufactures and markets a wide range of audio and infotainment solutions for the automotive, consumer and professional markets – supported by 15 leading brands, including AKG, Harman Kardon, Infinity, JBL, Lexicon and Mark Levinson. The Company is admired by audiophiles across multiple generations and supports leading professional entertainers and the venues where they perform. More than 25 million automobiles on the road today are equipped with HARMAN audio and infotainment systems. HARMAN has a workforce of about 13,000 people across the Americas, Europe and Asia, and reported net sales of $4.2 billion for twelve months ending December 31, 2011.