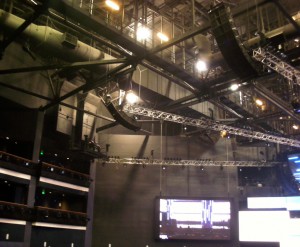 “With any live TV awards show, there are a number of specific considerations to deal with and the American Music Awards broadcast was no exception,” noted Mikael Stewart, VP of Special Events, ATK Audiotek. “A primary concern was that we had to make sure the house sound was loud enough–but also make sure that we didn’t intrude on the audio for the broadcast and overwhelm it with ambient noise.”

“In order to accomplish this, we went with JBL VERTEC mains and subwoofers,” Stewart added. “The VERTEC speakers give us more control over directionality, with fewer reflections off the theater’s walls and better accuracy in being able to cover all the seats. VERTEC’s focused coverage patterns are also an advantage in such a large venue, where reverberation and ambient noise can be a problem if you excite the room too much and don’t keep these factors under control.”

ATK Audiotek arranged the VT4889 speakers in eight clusters–four main arrays of nine, 10, 10 and nine speakers each, and four delay clusters of seven, nine, nine and seven each. In addition, five VRX932LA’s were placed under the balcony for additional coverage. The VT4880A subwoofers that were already installed throughout the theater were used to support the low end.

“Another very big advantage is that JBL VERTEC speakers are an industry standard and their performance capabilities are well known,” noted Stewart. “When we do these types of music awards shows, we can have something like 12 to 18 different artists and bands – and they all have their own sound engineers. It’s a big advantage for them to know the characteristics of the speakers that they are working with.”

“The Nokia is a very large and versatile ‘black box’ kind of theater,” Stewart pointed out, “and you can rig speakers just about anywhere in the room. There were no balcony hangs to contend with and it gave us more placement freedom than we’ve had in other theaters. Also, JBL VERTEC line arrays are lighter than most PA speakers, which adds to their rigging flexibility and the ability to place them at almost any angle.”

HARMAN (www.harman.com) designs, manufactures and markets a wide range of audio and infotainment solutions for the automotive, consumer and professional markets — supported by 15 leading brands, including AKG, Harman Kardon, Infinity, JBL, Lexicon and Mark Levinson. The Company is admired by audiophiles across multiple generations and supports leading professional entertainers and the venues where they perform. More than 25 million automobiles on the road today are equipped with HARMAN audio and infotainment systems. HARMAN has a workforce of about 12,500 people across the Americas, Europe and Asia, and reported net sales of $4.0 billion for twelve months ending September 30, 2011.